It’s about building a culture of correct attitudes and disciplines, empowering people to prevent hazards and to mitigate risk.

It was discovered that about five million years ago, early humans started using footwear to protect them from the extreme weather situations.

We strive towards no harm in all that we do, it's more than just following rules, it’s one of our values at Partners in Performance and it is about building a culture of correct attitudes and disciplines, empowering people to prevent hazards and to mitigate risk.

No Harm is ‘hard wired’ into what we do. Whether at home or at work, we live ‘No Harm’ and have a track record of helping others do the same. Further, we recognise we must continue to lead by example, particularly when it comes to the journey toward no harm with regard to safety, the environment and our people. In this regard, safety shares, walking the talk, coaching, having the courage to call people up on unsafe acts or conditions are all part of our philosophy and part of each of our daily lives, whether on a client site, in the office, or at home.

We understand that we have an obligation to protect not only ourselves, but also those around us and the environment in which we live. No harm is the only defensible goal, and every day, we strive to achieve that goal. Through a relentless journey which builds awareness and systematically makes things better by eliminating unnecessary risks, we will improve our world.

This flows directly into the work that we do on client sites, both explicitly and implicitly.

We at Partners in Performance strive towards building a "No Harm", safety-conscious culture which allows us to be safer and more productive, every day. To help us on this journey, we decided to help our people, and our clients, using some simple, helpful tools that can be used to improve our knowledge and our focus on safety-related matters.

It was discovered that about five million years ago, early humans started using footwear to protect them from the extreme weather situations.

Early humans wrapped their feet with dried leaves, animal skin or leather they obtained from the wild to protect their feet from the harsh environment. Later, the Egyptians created sandals which led to the creation of other forms of footwear.

The first type of protective or “safety” shoe was wooden boots, called sabots, which originated in the 1600’s. Workers in Europe wore them for protection from falling objects. Wooden boots protected farmers on the field from sharp objects lying in the ground and protected toes in case a horse or cow stepped on them. During the early industrial revolution, workers used sabots by throwing them into the gears of factories to stop production. The word "sabotage" came from this activity. “Sabot” is also a term used for a wooden or metal disk that was attached to a projectile in a muzzle loading cannon.

While a precise date and time for when steel-toes shoes were first used is hard to pinpoint, we know that it was at the beginning of the 20th century when industrial safety became an issue. At that time individual states began enacting compensation laws. Until then it was cheaper for the employers to replace an injured worker than to introduce safety measures. Large companies became interested in investing into safer equipment due to liability costs. Red Wing Shoes moved into a steel toe line in the 1930s. Another early example of protective shoes were German marching boots or Marschstiefels that were used by the non-commissioned officers in World War II, which were reinforced with metal toe caps.

When OSHA was enacted in 1970, a number of standards for personnel protective equipment (PPE) were included, one of which was 29 CFR 1910.136, Foot Protection. This standard states that “The employer shall ensure that each affected employee uses protective footwear when working in areas where there is a danger of foot injuries due to falling or rolling objects, or objects piercing the sole, and where such employee's feet are exposed to electrical hazards.” While specific performance criteria are not listed in this regulation (such as how well they must protect the wearer), it does reference the American National Standard Institute or ANSI performance criteria for footwear.

Other testing criteria to ensure an adequate level of protection to the wearer include protection of the metatarsal (long bones in the foot, leading to the toes), conductive properties (build-up of static electricity whereby the shoe is designed to drive static electricity away from the body, into the ground), electrical hazards (footwear having non-conductive electrical shock resistant soles and heals), puncture resistance (designed to reduce the chance of being injured due to sharp object penetrating the bottom of the footwear, as well as having the ability to resist a force of 270 lbs while not showing any signs of cracking after being subjected to 1.5 million flexes!).

While there are many testing criteria for safety shoes, only the criteria for impact and compression are required to meet ANSI Z-41 standards – the other protective qualities are additional and need to be considered based on the specific work to be performed.

With so much thought and work having gone into this to protect our feet, stay up to date and wear yours. 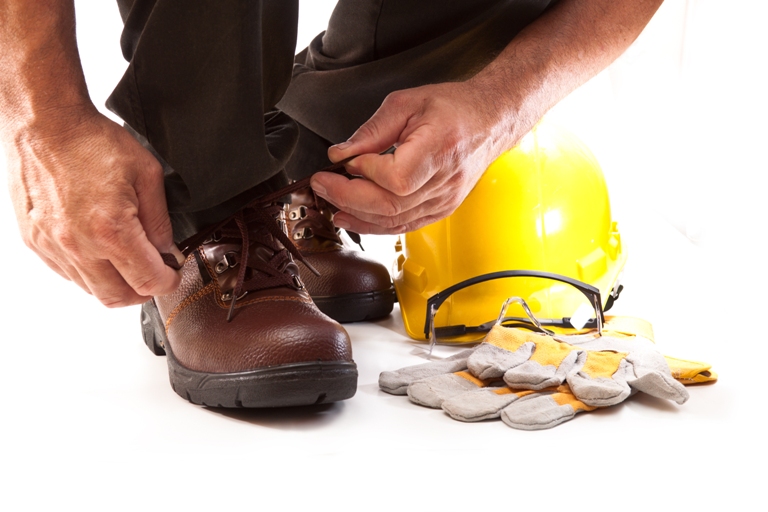